Biopolymers are useful in the industry due to its elastic properties and sustainability as replacements of non-renewable polymers. In this article, bioplastics were produced and characterized using chitosan (CH), sodium alginate (SA), and galactomannan (GAL) from insects (Hermetia illucens), brown algae (Macrocystis pyrifera) and seeds (Leucaena leucocephala), respectively. The structure of biopolymers was observed by infrared spectroscopy (FTIR) and characterized by viscosity at different concentrations. The developed bioplastics were characterized by color and mechanical properties (texture). The results were compared to standard samples (commercial). The FTIR spectra confirmed the presence of the typical structure (footprint) for the obtained polymers. The SA showed significantly higher viscosity for all concentrations compared to the standard and the other polymers. The bioplastics strength was similar among CH, SA and GAL for all concentrations; only SA (0,5%) demonstrated higher strength than the standard. For color measurements, hue value indicated a red-yellowish color and the chrome increased directly proportional with polymer concentration. The observed properties suggest that these sustainable sources might be an alternative to bioplastic production, which can be extended to functionalization and molecular interactions for broad applications in different industries.
Keywords: galactomannan, chitosan, sodium alginate.

Nowadays, concern about the environmental impact of industrial sectors has driven the search for sustainable alternatives for both material production and processing. One of the main problems is plastic waste pollution, due to these materials not being biocompatible and, at the same time, highly resistant to degradation. Bio-based polymers are used as an alternative to replacing non-renewable plastics using available, sustainable, and local sources (Wool and Sun, 2005).

Bio-based polymers can be used as adhesives, foams, films, rigid or flexible plastics, coatings, elastomers, rubber and resins, among others (Wool and Sun, 2005) in several industries such as food, chemical, pharmaceutical, cosmetic, textile and agriculture. Some compounds used for that purpose are starch, cellulose, carrageenan, proteins (gluten, soy, zein), gums, alginate, galactomannan and chitosan, which have been considered as novel ingredients (Verlinden, et al., 2007; Vox, et al., 2013).

Another highly available biopolymer is chitosan, which is obtained from chitin (N-acetyl glucosamine with β-(1,4) bonds) deacetylation. It is present in crustaceans, insects and other species such as yeast and fungi. Chitosan has been applied in multiple areas (food, cosmetics, textile and pharmaceutical) to produce ecological materials (Caligiani, et al., 2018; Chávez, et al., 2019) such as edible coatings, antimicrobial films and large-scale 3D products (Fernández and Ingber, 2014; Revathi and Thambidurai, 2017; Souza, et al., 2017).

Recently, increasing interest in obtaining compounds from insects such as protein, oil, and polysaccharides has taken place because they are a sustainable and low-cost source for raw material production (Caligiani, et al., 2018). From this point of view, the inclusion of emerging materials such as microalgae, duckweeds (aquatic plants) and algae is being encouraged for the production of added-value compounds. An example is macroalgae, which is rich in alginic acid, also known as alginate. Its salts, especially sodium alginate, are useful for industrial applications such as food packaging material, paper, coating and also for pharmaceutical and medical purposes. In the food industry, it is used as an edible coating and bioactive compounds carrier (De’Nobili, et al., 2016; Ferreira, et al., 2016). Sodium alginate is a polyelectrolyte constituted by monomeric units of α-D-mannuronate and β-l-glucuronate linked by 1-4 bonds. The brown algae (“giant kelp” sargassum) has recently become an environmental concern because of its accumulation in the sea and the harmful effect it causes to a wide array of animal species and coral reefs (Popa, et al., 2011).

Brown algae powder (Macrocystis pyrifera) was soaked overnight (20 h) in 600 mL of CaCl2 (1%) at room temperature. Then the algae were washed with distilled water (3 times), afterwards, the pellet was resuspended in 250 mL of HCl 5% for one hour, filtered and then re-washed with distilled water. The obtained pellet was incubated overnight in 600 mL of Na2CO3 (3%). The mixture was centrifuged at 6000 rpm for 20 min at room temperature. Sodium alginate was precipitated from the supernatant by adding ethanol (1:1 v/v). Finally, sodium alginate was washed with an excess of ethanol and water and freeze-dried (Chee, et al., 2010).

Dried guaje seeds (Leucaena leucocephala) were soaked in water (1:10) and stirred at 60 °C for 1 hour. Afterward, the mixture was filtered, and the extract was centrifuged at 6000 rpm at 25 °C for 5 minutes. The galactomannan was precipitated by adding ethanol 96% to the supernatant (1:3 v/v) under slow and constant stirring, filtrated, and freeze-dried (Mittal, et al., 2016).

The structure of the biopolymers chitosan (CH), galactomannan (GAL) and sodium alginate (SA) was determined by FTIR and compared to commercial samples. Dried-samples (powder) footprint was obtained in a range of 400-4000 cm-1 using an Agilent Cary 630 FTIR infrared spectrometer (Agilent technologies).

Rheological properties of biopolymer aqueous dispersions at three concentrations (0,5%, 1% and 1,5%) were measured using a Brookfield Viscometer DV-II equipped with an SC-27 needle at 20 °C at 100 rpm. Galactomannan and sodium alginate dispersions were heated at 60 °C x 1 h and 40 °C x 10 min (respectively) and cooled down to room temperature prior measurements. In the case of chitosan, the used solvent was acetic acid (0,1 M) and the mixture was kept under stirring overnight. Commercial chitosan, xanthan gum and sodium alginate were used as control samples.

Biopolymer solutions (0,5%, 1% and 1,5%) with 1% of glycerol were stirred until its homogenization, then 15 mL of the mixture was poured in a silicone cast and left to dry at room temperature for approximately 48 hours.

The mechanical properties of bioplastics were measured using a texture analyzer (Shimadzu EZ-SX). Uniaxial compression test was performed to study the fracture properties for a better understanding of the energy in the matrix and determine the type of network formed by the studied polymers. The bioplastics were cut into cylindrical samples (12 mm of diameter and 0,5 mm of thickness), the final distance was set at 3 mm of deformation using 1 mm/s of speed at room temperature. Data was analyzed by Trapezium software (TRAPEZIUMX).

All experiments were done in triplicate (n = 3) and an analysis of variance (ANOVA) of the data was performed using the Minitab software version 18. Significant differences were determined by using Duncan’s multiple comparison procedure at p < 0,05.

Extracted biopolymers showed a similar footprint than standard samples for all cases. However, in some regions, higher intensity peaks were observed (Figure 1). In the case of SA, standard samples showed a lower presence of hydroxyl, mannuronic and uronic acid groups (2800-3600 cm-1 and 1150-800 cm-1) compared to the extracted biopolymers (Figure 1A). For chitosan (Figure 1B), higher peaks for the standard samples were observed uniquely at 2800-3600 cm-1 region (C-H, N-H, and O-H bonds). In Figure 1C, it can be observed that xanthan gum (standard) showed an increased intensity compared to GAL, mainly at 900-1150 cm-1 800-870 cm-1 (C-O and C-O-H groups) in the carbohydrate structure.

These differences demonstrated some structural changes in the biopolymers; it is well known that the molecule structure is determined by several factors such as the extraction parameters, the nature of the raw material, standardization (commercial material), among others. Commercial chitosan and xanthan gum (CH standard and GAL standard, respectively) were obtained from crustaceous and bacteria, respectively, unlike the biopolymers from this study, which were obtained from insects and legume seed. In the case of SA, even though both standard and extracted are from brown algae, the compositional characteristics and extraction method could differ from each other affecting its structure. 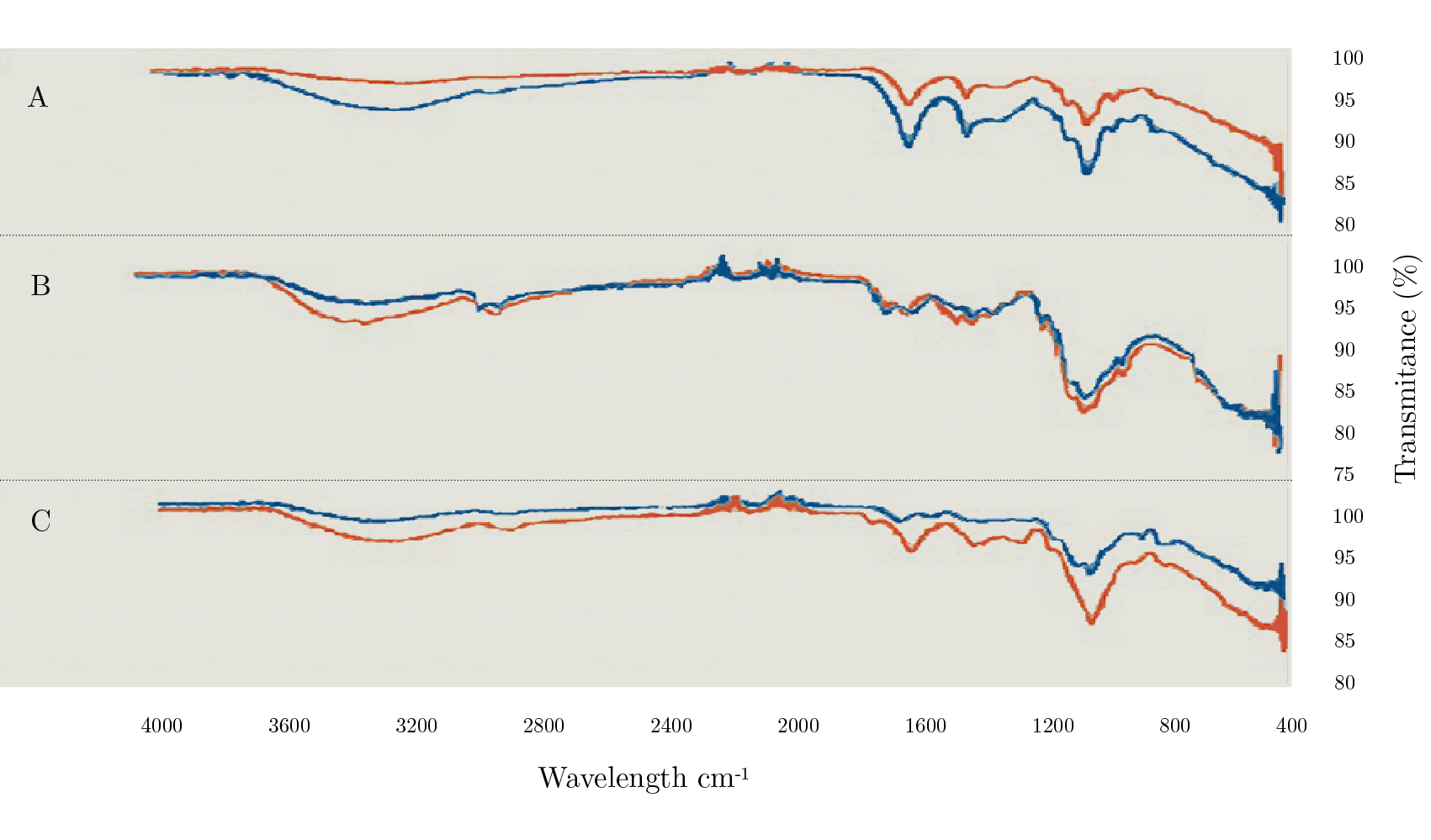 Figure 1.   FTIR spectra for SA (A), CH (B), and GAL (C) in blue lines and their respective standard polymers in orange lines. 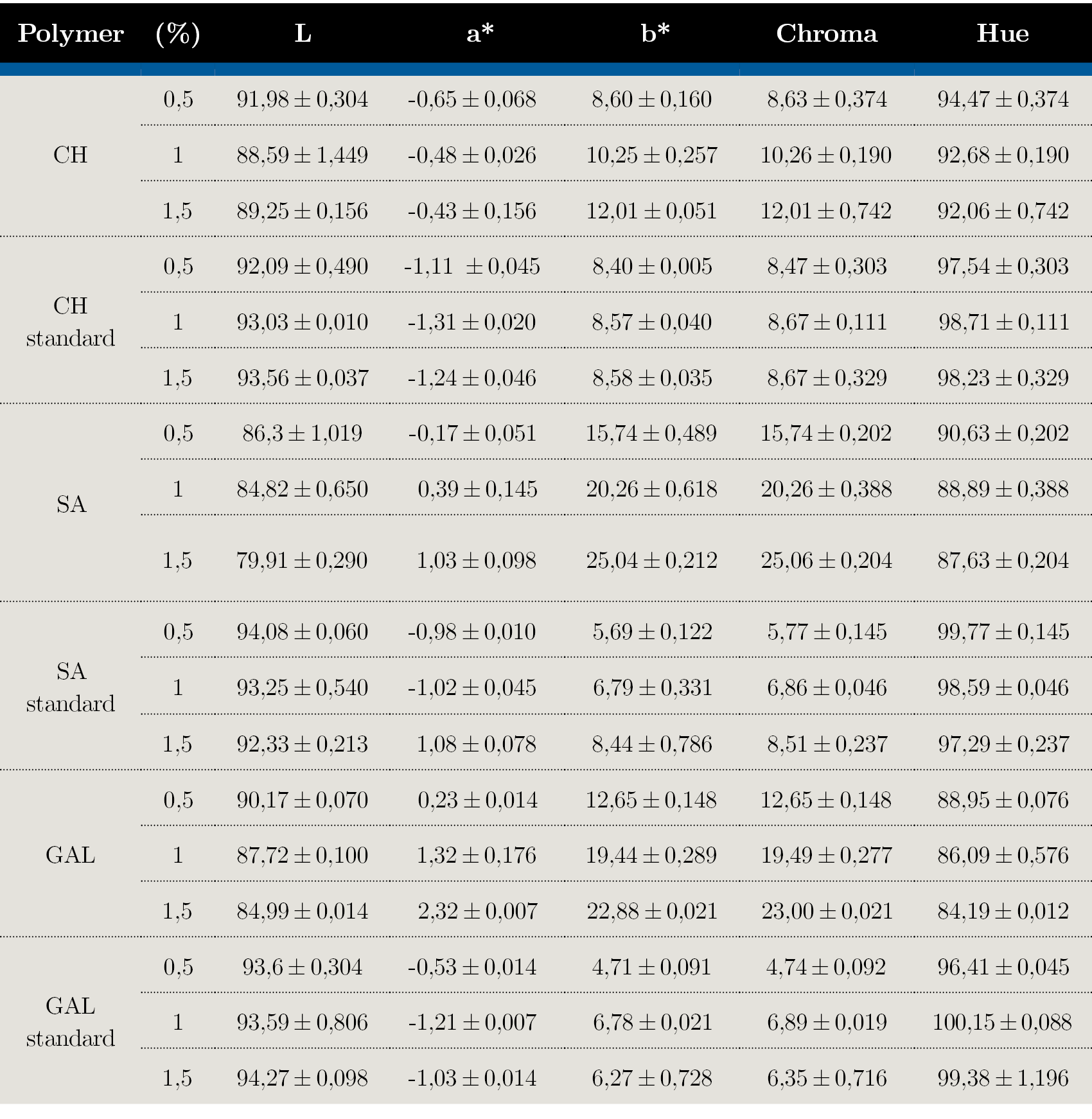 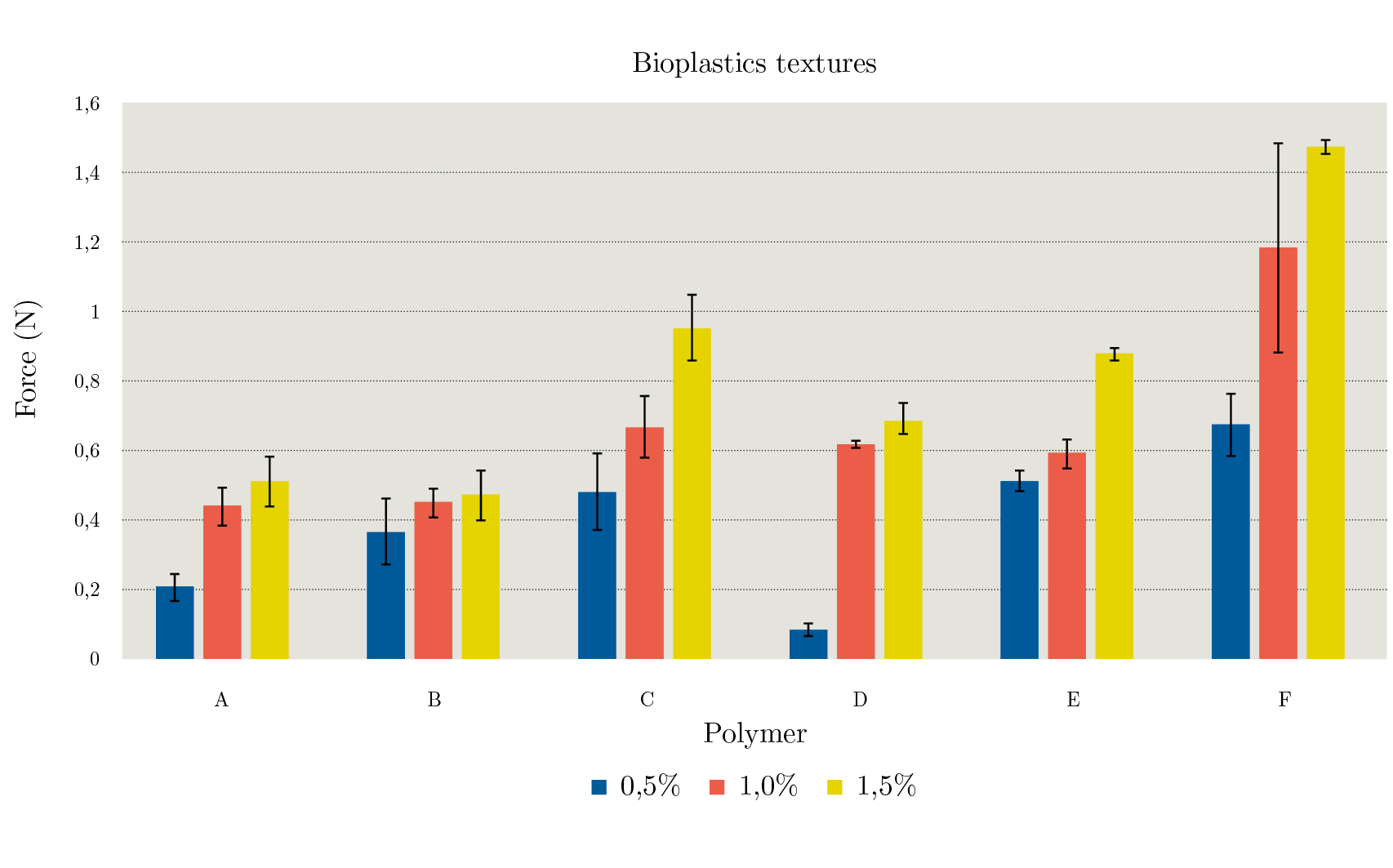 Figure 2.   Mechanical properties of bioplastics from sodium Alginate (A), chitosan (B), galactomannan (C) and their controls (D, E and F, respectively).

The functionality of biopolymer molecules is closely related to its structure; thus, the presence and characteristics of the structural elements will determine its usage. In general, the structures observed by FTIR were in agreement with the flow behavior (viscosity).

SA samples showed a more preserved structure (higher absorbance peaks) denoted by its higher viscosity in comparison to standard samples. Probably a higher proportion of mannuronic and uronic acids (800-1150 cm-1) allowed better structural building blocks formation and water interactions in the case of viscosity (Zubia, et al., 2008; Gomez, et al., 2009). In GAL polymer, although similar footprint was obtained (compared to its standard), the chemical differences observed were reflected on the viscosity of the dispersions and bioplastics texture. However, the viscosity of legume seed GAL was considerably higher (~120 cP) than reported values for the same raw material (15 cP) at equal concentrations (Mittal, et al., 2016). Non-structural changes were observed for CH biopolymers; nevertheless, the viscosity varied greatly. A critical parameter in these types of compounds is the degree of deacetylation, which in large part determine its molecular weight. The deacetylation degree of CH from insects in this work was not determined. However, commercial chitosan (from shrimp shells) was between 75-85% (medium molecular weight); these features may be the leading cause of distinct viscosity and texture. Bioplastics color depends on the type of source and the treatment applied. In this study, the extracted polymers were not previously purified. Therefore the presence of pigments (chlorophylls, carotenoids and polyphenols) could decrease the clearness of the obtained bioplastics.

The desired functional properties of bio-based polymers suggest that the non-conventional sustainable sources from insects (Hermetia illucens), legume seeds (Leucaena leucocephala) and brown algae (Macrocystis pyrifera) could be an alternative for bioplastic production, which can be extended to functionalization and molecular interactions for broad applications in different industrial sectors.

The authors thankfully acknowledge to CONACyT for the fund granted in the project FOINS 4950, as well as “Universidad De Las Américas Puebla” for its contribution with infrastructure and equipment for this investigation.